Doll Picnic in the Park

As regular readers know, Kirsten has been very upset that other dolls had more exciting adventures than she did. See this page and this page in the archives.
To try to pacify her, I took her to a picnic in the park! 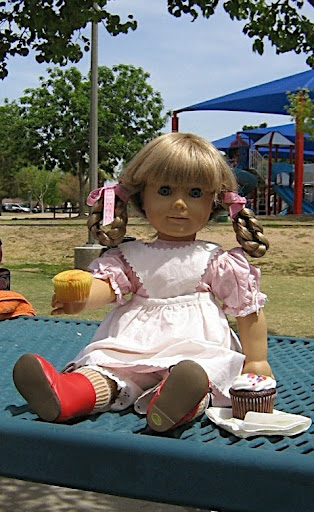 "Something most dolls don't have to worry about," I told her.

Just when Kirsten thought she was going to have a perfect picnic, she dropped her cornbread muffin. 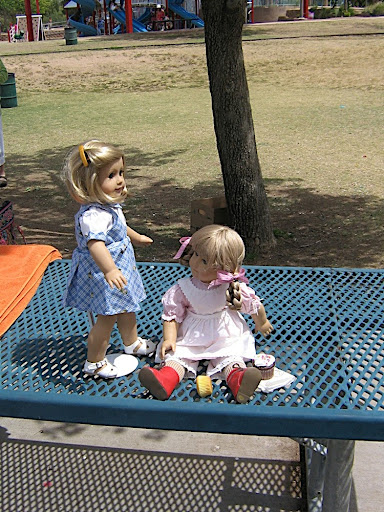 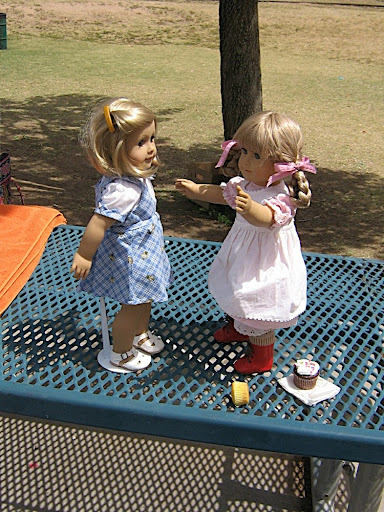 Her cornbread muffin forgotten, Kirsten leaped to her feet. "NO! Nellie said you couldn't get big! IT'S NOT FAIR!!!!! You're way too much trouble when you're small enough to throw like a beach ball. And I don't want you borrowing my clothes. They're archived and way too valuable! You get small right now, Mini Kit! I order you!"

Kirsten blinked. "But I only know one Kit, so you must be--"

"I'm regular Kit. Miss Cheap Lady picked me out for her mom at American Girl Place Los Angeles in 2006. But I'm not related to Mini Kit. We just have the same name."

Kirsten plopped back down. "Like me and Norwegian opera singer Kirsten Flagstad." 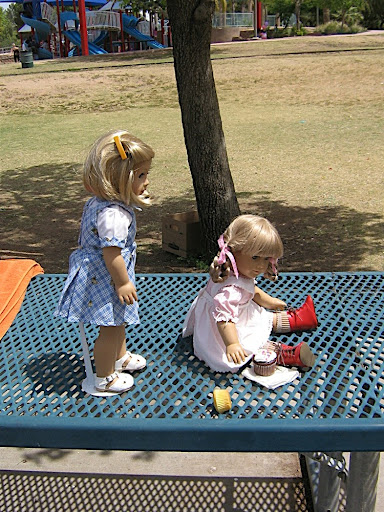 "Wait," Kirsten said. "2006 was a long time ago. Why didn't anyone tell me someone was living with that Cheap Lady's mom?"

"I don't know," Big Kit said. "It could be that Miss Cheap Lady told you but you ignored her. I've read your stories and you...no offense, but you aren't always the best listener. Kirsten?"

But Kirsten had already wandered off. 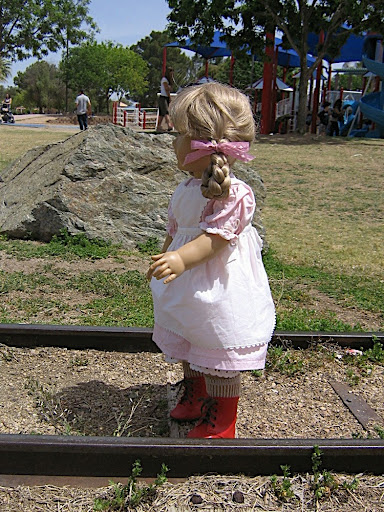 "I wonder where this suspiciously straight ground-ladder that extends into the distance goes?" Kirsten asked. "Maybe it'll take me back home to Nellie. I still think anyone named Kit is up to no good." 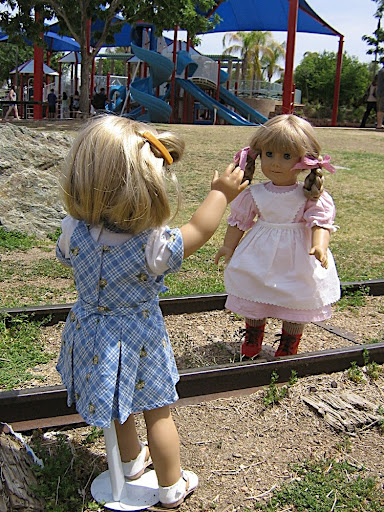 Big Kit panted, "Kirsten! That's not a ground-ladder. That's a train track! And you should never ever EVER play on train tracks. They're dangerous!"

"Hmph," Kirsten said. "Of course I know it's a train track. But no train stops in the greater Phoenix area. The closest one is in Maricopa! Besides, I don't know how credible any doll is who uses a doll stand to stay upright. I think someone's been drinking too much Cheerwine."

"What are you even talking about?" Big Kit asked.

"It's a cherry soda from North Carolina," Kirsten said, "and I'm told it's delicious." 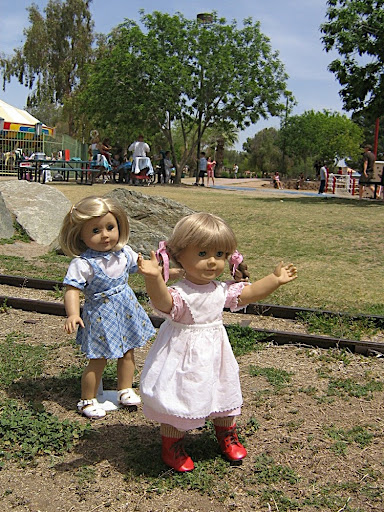 "It's not like I would have gotten hurt anyway," Kirsten said. "But whatever. Those train tracks weren't any fun anyway." She stormed off...and up... 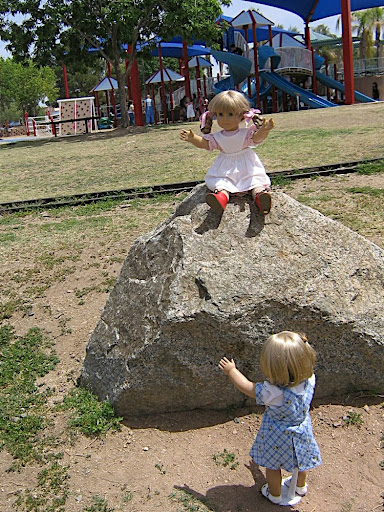 "I'm queen of the mountain! Bet you can't knock me off."

"I don't want to knock you off," Big Kit said. "You should get down from there. It's dangerous!"

"You're a scaredy-Kit," Kirsten said. "Just like you're scared to play on the train tracks. You're a chicken and you're no fun. Maybe I'll see if I can jump off the boulder and onto the tracks. That would show you--" 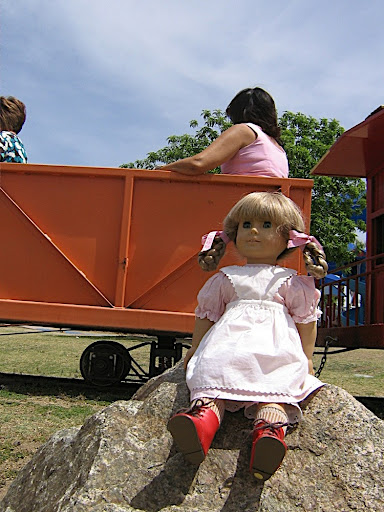 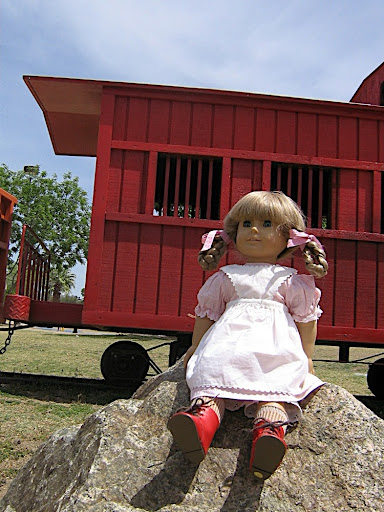 "What's that rumbling noise?" She looked over... 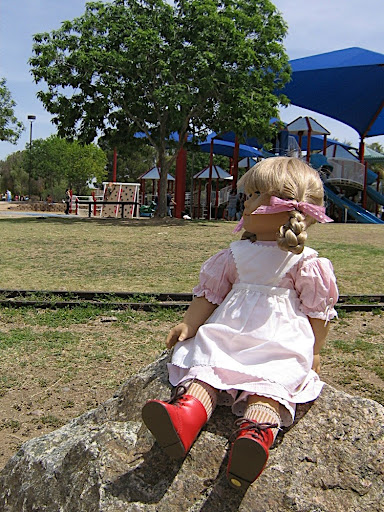 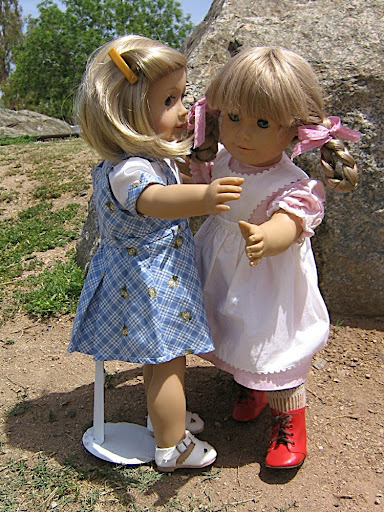 ...and leaned against Big Kit.

"Are you all right?" Big Kit asked.

Kirsten was very quiet for a minute. "You saved my life," she finally said. "I guess you can't be related to Mini Kit. She probably would have glued my shoes to the track."

After another pause, Kirsten continued. "Well, I mean, you kind of saved my life. Maybe. A little. Though the train probably would have stopped for someone as cute as me. And I suppose if something had happened to me, that Cheap Lady would have found a way to fix me. Still...thanks, I guess."

Big Kit frowned. "Do you at least promise never to play on train tracks again?"

"I promise!" Kirsten said. "Now come on! Let's tell the others we're queens of the party!" And they shoved themselves into the group of dolls. 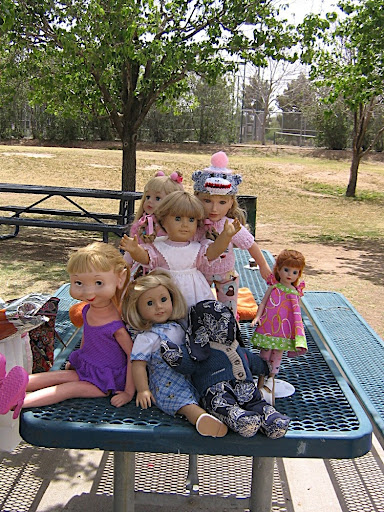 "Hooray for Big Kit!" Kirsten cried. "She's way better than Mini Kit. But not as great as me. But she's still pretty good. Hooray!!!!" 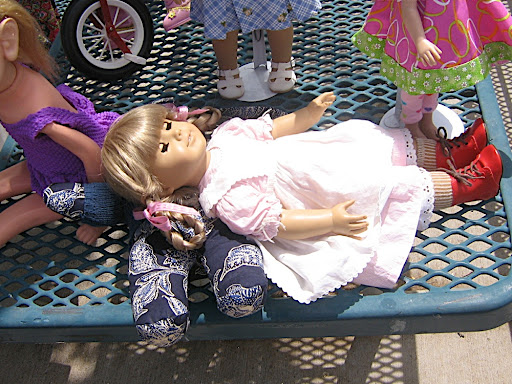 ...as Kirsten took a nap on Big Kit's friend Bun.
*Train tracks are DANGEROUS and you should NEVER EVER play on them!*
Posted by Julie Bihn at 5:00 AM